Types of Sets: The strings here offer a wide choice to suit the different requirements of most players. BEST covered strings are wound with Solid Silver, and BEST plain strings are treated with a modern material which enhances tuning stability and resists gut deterioration due to acid in finger perspiration. On request, an equivalent historical treatment by linseed oil can be substituted. FIRST Quality gut with Silver Plated Copper wound basses is our most popular stringing in the late baroque tradition, combining good resonant tone with ease of handling.

Diameters and Sets: When we started to make viol strings about 30 years ago, we measured the strings used by all of the experienced players we could find, and we called the most commonly used diameters (or equivalent diameters for wound strings) our 'Medium' sets. We designed Light and Heavy sets, and the range in-between covered the vast majority of what players used. A hand-full of players preferred lighter than our Light, so we offered X(extra)-Light, and heavier than our Heavy, so we offered X-Heavy. We now call these set specifications our 'Series A'.

Since then, there has been a minority of players preferring Light and X-Light sets for the treble viol and Heavy and X-Heavy sets for the bass viol for better balance in a consort. This is predicted by the Tension-Length Principle, which is that the string tension is proportional to the vibrating string length, for equivalent apparent sound output on instruments of different sizes of the same type. This Principle is followed nowadays by the violin family and lutes, and wherever we have historical information. There is but one piece of English historical information about viol string diameters, and that indicates that for a bass viol of modern size, the stringing would have corresponded with our Heavy set. We have consequently deduced our Series B sets, which include this information and conform to the Tension-Length Principle. Currently, the majority of players prefer Series A for their treble viol sets, and Series B for their bass viol sets. Alto viols (the original size for treble viols, tuned a tone lower) work well with Series A treble viol strings, but they may have to be longer.

The numbers in the following Table are the string diameters or equivalent diameters (ED's) of catline or wound strings, expressed in 'thou' (thousandths of an inch).

STRINGS FOR THE PARDESSUS DE VIOLE AND QUINTON

The pardessus de viole first appeared at the end of the 17th century as a viol smaller than the dessus, which was largely playing the abundant repertoire intended for the violin. It had 6 strings, and probably was developed to play as a dessus at a higher pitch standard, but later was tuned tog,c',e',a',d",g" at a lower one. Around 1725, a new 5-string tuning became popular, particularly amongst ladies. The tuning g,d’,a’,d”,g” had the high strings like the pardessus de viole and the low strings like the violin. Holding and bowing was like a viol, and frets were used. Some earlier pardessus viols were then played with the new tuning. Violins were converted by replacing the neck and pegbox. New instruments were made with either traditional viol bodies or with bodies that were various compromises between a viol and a violin. This new instrument was called either 'pardessus de viole à cinq cordes' or 'quinton'. Either name was sometimes used for any instrument with that tuning, but the pardessus name was mostly used when the body design was like a viol, and the quinton name was mostly used when the design had obvious violinistic aspects. Popularity peaked around 1750 and was waning when the French Revolution terminated it. For further information, see M. Herzog, 'Is the quinton a viol? A puzzle unravelled', Early Music (Feb. 2000), pp.8-31.

The string stops of these instruments were very similar to those of the violin, and their apparent difference in highest pitch with the violin suggests a difference in pitch standard that they played at. There were three pitch standards used for concerted music in 18th century France. The modern version of the middle one is a' = 415 Hz. The others were about a tone higher and a tone lower than the middle one. We can expect that 18th century French musicians were no more tolerant of a high rate of breakage of highest strings than musicians in Praetorius's Germany. We can then deduce that the lowest pitch standard (called 'very low French chamber pitch' by Quantz in 1752) was usually used by these instruments.

So if we tune a pardessus or quinton of up to a' = 415 Hz, some gut 1st strings (at g") will break within a day, while a few very exceptional ones will last as long as a few weeks. This represents the natural variability of gut, and we cannot sort strings out according to strength because there is no way to test their strength without breaking them.

Following are the diameters or equivalent diameters (ED's), which are the diameters of solid gut strings with the same weight as the non-solid-gut strings used, for the light, medium, and heavy sets we recommend. The string types we offer are shown in the price list. It would be more historically accurate if one used open-wound or tigerline strings, called 'half wound' strings then, instead of the catline 4th strings in the recommended list. That was the practice in 18th century France according to evidence on the stringing of violins and bass viols. They provide the smoothest transition between solid gut and metal-wound strings. It is not fashionable nowadays to use them.

Many hurdy-gurdy players have tried modern types of strings on their instruments (e.g. metal or solid nylon, and metal wound on metal or on nylon floss), and found that gut, as the string material or as the core of a wound string, both sounds better and is easier to get to sound. When instruction books indicate that strings of the violin family are used for the hurdy gurdy, it is the gut versions of these strings that are implied.

Since the melody doesn’t cross strings In hurdy gurdies, choosing strings is a matter of finding the desired blend of sound, rather than balancing strings for equal output. Blend involves comparative loudness. The loudness of bowed strings is largely dependent on string tension. Different string tensions at the same pitch are achieved by different weights of the vibrating lengths of the strings. String diameter is a measure of the weight of a plain gut string, and equivalent diameter is the measure for a string with metal wound around the gut. The equivalent diameter (ED) is the diameter of a string made all of gut that would have the same weight as the whole wound string has.

In the blend most hurdy gurdy players prefer, the string tension is about 8 Kg on a high-pitched Chanterelle. If one Chanterelle is tuned an octave below the other, the tension on the lower one is usually at about half that of the other, or about 4 Kg. The tensions on the Trompette and the Petit Bourdon are also about 4 Kg, while that on the Mouche is about 3Kg, and on the Gros Bourdon is about 5 Kg.

A plain gut string is made either with low or high twist of the gut strands in it. Low-twist strings are stronger, and when only these are offered in the Table, strength is needed to tune them up to the required pitches without breaking too often. The other unwound strings can be either low-twist or high-twist strings. High-twist strings are more brilliant (with more higher harmonics in the sound), and are recommended except for Chanterelles, where the stiffness of low-twist gut is usually preferred because it allows more of the pitch bending with key pressure used for expressiveness.

The diameters of plain gut strings and equivalent diameters of wound-on-gut strings in the Table of Specifications and Prices are listed in four columns: I, II, III and IV. For the strings other than the two Bourdons, the diameter differences between strings in adjacent columns is about 6%, with the one on the right just noticeably louder than the one on the left. Some prefer more equal octave Chanterelles, and use a column I for the first and column IV for the second. The differences between adjacent columns for the two Bourdons are twice as great as that for the thinner strings because taste concerning blend of sound varies much more. A player who likes a ‘cello G for the Petit Bourdon prefers a column IV string, while many others prefer a column I string. If the Gros Bourdon is only to be tuned to G, columns to the left are preferred. If it is only to be tuned to C or D, columns to the right are appropriate.

Except for the Gros Bourdon, diameters and ED’s in columns II and III are the most popular for all of the strings. For the Gros Bourdon, most people use weights in columns I or II. The string then works well when tuned to G, but is very weak when tuned to D. The use of column III and IV weights is rapidly growing for players who want a substantial D sound in D-G tuning or a low C in G-C tuning.

The popular sets listed below do not include strings listed as modern alternatives. The first four sets have 6 strings (5 strings if the instrument has no Mouche), but the G-C sets have one less packet (the two chanterelles are in one double length). The combined sets include the first Chanterelle and Gros Bourdon for each tuning, with the other strings common to both tunings (i.e. two more strings than the other sets). 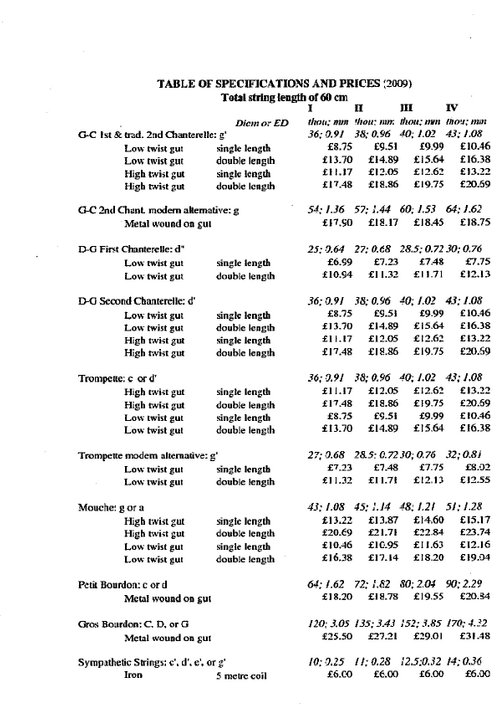 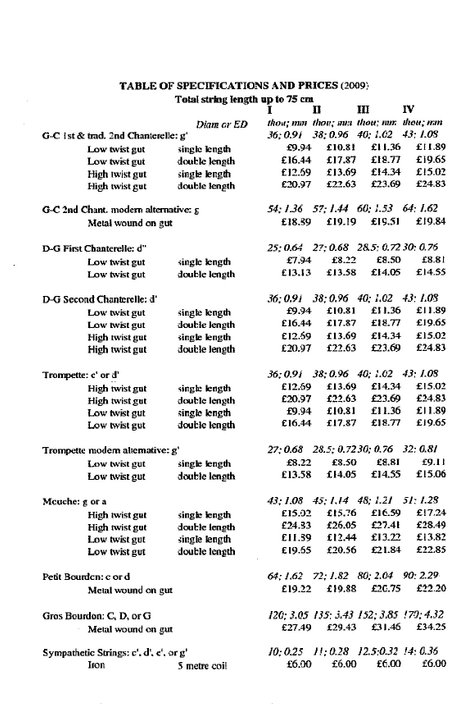